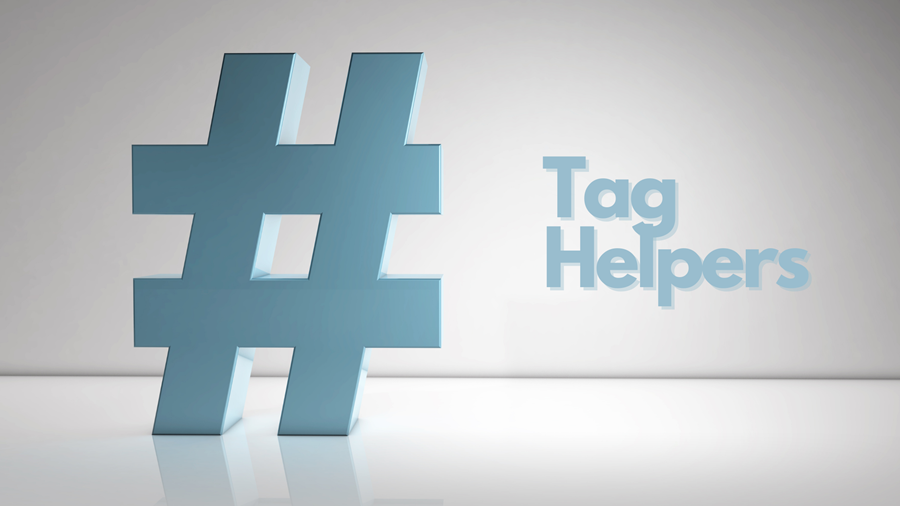 TagHelpers were introduced in MVC6 and have been around for some time now. Previously, they were known as HTMLHelper.

Tag Helpers allow you to modify and improve existing HTML components in the views. As a result, one usually includes them (in the views), which are then processed by the Razor templating engine. This, in turn, produces HTML and feeds it to the browser.

Tag Helpers make working with HTML a breeze by leveraging the capabilities of Razor and C#. Newbies can instantly hop in and start altering things without the need to learn C# because Tag Helpers feels so natural and appears like typical HTML.

In this post, let us understand more about Tag Helpers and why we need them.

What are Tag Helpers in ASP.NET?

Tag Helpers enable web developers to construct presentation layers in their web applications using traditional HTML tags. In other words, it enables one to create a presentation layer using HTML tags while still writing business logic in C# server-side code that will run on a web server. Developers can replace the Razor cryptic syntax with @ symbol with a more natural-looking HTML-like syntax using Tag Helpers.

With the help of Tag Helpers, one can enhance existing HTML tag elements or develop custom components that behave like HTML elements. In fact, you may use the Razor files to write server-side code to generate new elements or render HTML elements.

Using Tag Helpers, you can define the name, attribute, and parent name of custom elements in the same way HTML elements are defined. However, you must keep in mind that Tag Helpers do not replace HTML helpers. So, you can utilize both in tandem as and when needed.

You can use Tag Helpers as -

Here are the key benefits of Tag Helpers -

The Anchor Tag Helpers are a set of extensions to the standard HTML anchor tag (..) that adds a new attribute. The attribute name must begin with asp- according to the standard convention. Attributes of this Tag Helper are asp-controller, asp-action, asp-route-{value}, asp-route, asp-all-route-data, asp-fragment, asp-area, asp-protocol, etc.

This Tag Helper object lets you catch the application content within the ASP.NET core distributed cache provider. These helper objects typically increase the performance of the application. Helpers objects and Cache Tag Helpers inherit from the same base class. For this reason, all attributes available under cache tag helpers will also be made available for Distributed Cache Tag Helpers. The attribute of this Tag Helper is ‘name’.

This Tag Helper conditionally produces the enclosing HTML text depending on the current hosting environment. There is only one attribute in this assistance object: name. A value can be assigned via the comma separation method to this attribute, which supports string type values.

This Tag Helpers approach makes working with Form and HTML elements within a Form easier. Here’s what it is capable of -

The Image Tag Helpers essentially expand the HTML's img> tag. It always requires an src tag as well as the asp- append-version Boolean attribute. If a static image source from a hosted web server is required, a cache bursting string is used as the image source in the query parameter. This method ensures that whenever a file is changed, any corresponding modifications to the web server must be made as well.

Remember - You can use the tag helper to extend an existing element or build new ones. With the help of Tag Helpers, you can also create unique reusable attributes or elements. The most essential feature of Tag helpers is that they contain presentation logic. In summary, Tag Helpers provide us additional control over the content in a way that is easy to maintain.