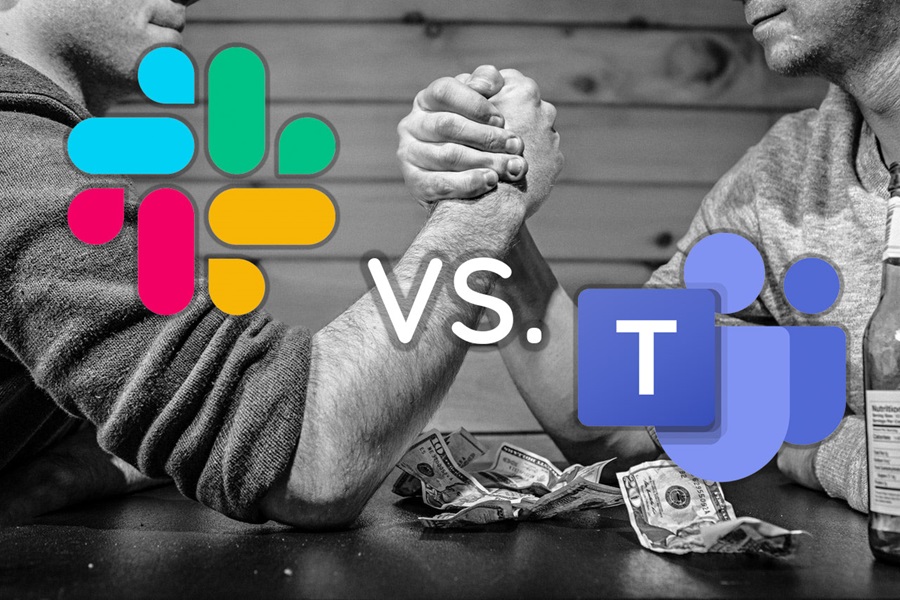 Collaborative workspaces were an ever-increasing trend and have become a necessity in the past weeks. Though the concept of workspace collaboration isn't a new topic at all, choosing the best frontrunner to boost the productivity of a business is what every team aims for. And given the choice between the rise of Slack and Microsoft Teams, it is always worth the time invested in comparing the important features between these two communicative apps.

If you're still confused in choosing the ideal collaborative tool for your business, then a 5-minute read through this useful article might help you fix your deal with no further hassle of a thought.

First things first — both Slack and Microsoft Teams are always way ahead of one another. By this, we mean that these amazing platforms definitely make for an adaptable conversation thread inclusive of interesting multimedia features like GIFs and emojis, bot assistance, storage capacity, and of course, integration. But if you're finding ways to filter the essentials of the so-called Slack vs. Microsoft Teams, then you must read on for further details!

Messaging forms the crux of staying connected with teams that may function under one roof or scattered across multi-dimensional geographies. Though Slack and Microsoft Teams are fairly similar with their conversational thread offerings, there always exist minute differences in terms of robustness and creativity. And by creativity, we mean GIFs and interactive stickers that pave the way for some colourful and interactive communication. In Teams, you'll always have an easy access to a library of GIFs and stickers along with a customization feature that allows you to add some highlights to your stickers. Contrary to this, though Slack offers seamless integration with Bitmoji, Giphy and other similar services, accessibility isn't as easy as witnessed with Microsoft Teams.

If you look forward to bringing in some variety to your messaging interface, then you ought to have better customisation modes, and Slack ultimately offers better variety than Teams. Whether it is switching between light and dark themes or customizing the overall appearance between 10 available options such as Dagobah and Nocturne, Slack helps you complement your message with fantastic theme settings. But with Microsoft Teams, there are no particular colour options and you have limited customization features to choose.

Apart from its paid versions, Slack offers a free model that includes 5GB of file storage. Though this benefit can be claimed only by a single collaborative team, it still paves the way for working with the platform on a trial basis before making in-app purchases and premium subscriptions. Paid plans with Slack are increased to 10GB and 20GB per user post availing the subscription. With Slack's paid versions, users needn't worry about any message history limit that is set to 10,000 on the free version.

Contrary to this, Microsoft Teams offers 2GB of storage space per user and about 10GB shared storage for team collaboration. But for higher efficacy and essential features, switching to the 1TB space and premium plans with unlimited storage might be a better choice, especially if teams need higher collaborative efficacy. Unlike Slack, there are no message history limits or caps in Microsoft Teams.

When it comes to availing the benefits of a wide array of integrated apps, Slack might fit the bill with over 800 app integration possibilities. If your team is collaborating with Slack's free app integrations, then you ought to note the fact that the limitation is set to 10 and nothing more than that.

Microsoft's Teams takes a different approach with this concept. With unlimited integrations with other user-friendly apps that fit well within the pricing tiers, you can incorporate around 180 apps. Though the app integration in Teams is quite less compared to Slack, it offers the best integration with Office 365, making it a suitable consideration for businesses that make high-end use of the Office Suites.

Slack's Standard package costs about $ 6.67 per user/month when the subscription is billed annually. Post the subscription, it automatically adds access to unlimited apps, storage, and enables screen sharing and guest access facilities. Now that's something interesting that brings in more for the deal!

For users who want more features, Slack's Plus plan of $ 12.50 and the Enterprise Grid plan might be the perfect choice.

Microsoft Teams offers only two premium plans. Office 365 Business Essentials along with the 300-user limit is parsed with a monthly billing of about $ ​5 per user. This plan also adds the OneDrive integration, Exchange email hosting, Microsoft Office Suite access, and the 10GB storage per licence.

Compatibility is one of the pivotal aspects of any collaborative platform and both Slack and Microsoft Teams can be used as web-based apps with any modern browser.

Slack is available on:

Whereas Microsoft Teams is availabe o:

Scattered and remote teams mean something more than just integration and it's the ability to meet each other face to face. Though both Slack and Microsoft Teams have got own perspectives to the web conferencing facility, there exists certain minute features you need to know before making your million dollar decision.

For instance, Slack offers a free plan that includes unlimited 1-to-1 video or voice calls. But with a wide network of distributed teams, a free plan isn't the perfect choice for conference-oriented meetings. If you need to setup additional callers over a single conference stream, then you obviously need Slack's paid plan versions that support approximately 15 callers simultaneously.

But with Teams, web conferencing is made far superior compared to Slack. Both its free and paid versions allow users to web conference with approximately 250 people simultaneously. You also have the ability to record your meetings for future reference and this is not something Slack has to offer you. Screen sharing facility is great in Teams compared to Slack as it supports only subscribers who make use of its higher paid tiers. So you've got to rely on something that's preferably the best and most affordable platform for enhanced web conferencing experience and Microsoft Teams has given this as a boon to many of its millions of users.

When it comes to achieving a fulfilling team collaboration, either of these apps is a good choice - there is really no good and bad guy here.

Slack shines when it comes to third-party apps and offers integrations for countless scenarios. It also performs very well and is intuitive to use.

On the other hand, Microsoft Teams is quite a good choice that works well for companies that completely rely on Office 365 for their mainstream purposes. If you are on Office 365 you basically get Teams for free, so it's a no brainer to try and see if it suits your needs.

In the end it comes down to what kind of other applications are being used on the side, what you are trying to achieve using either one of them and of it comes down course to taste as well.